The way that managers and CEOs view their computers often doesn’t do justice to just how important they are to their businesses or just how much of an impact the right or wrong computers can have on their organization. The point is that in order to get the most out of your staff, you need to give them the very best computers to work with and if you don’t then you won’t be letting them do their job properly. In business terms computers are ‘force multipliers’ which means effectively that they are tools that can be used in order to amplify the work your staff do. A hammer is a force multiplier in that it means that the same amount of force creates a lot more power and pressure and thus allows you to drive a nail into some wood much more quickly than you could with your fist – and a computer works the exact same way.

If your computers are running slowly, or if they can’t run the latest software, or if they crash every now and then, then your staff are going to take anywhere up to twice as long to complete their projects while they waste time waiting for the site to load, working with defunct software or waiting for tech support to come and fix their problems. If you multiply this by the number of tasks they do in a day and the number of staff you probably have in your employ, then it becomes suddenly very apparent that this can waste a huge amount of money and that you could be getting a lot more profit out of the same number of staff and the same amount of time. It’s time to start making the most of your computers then and increasing your profits without increasing overheads.

The first and most important thing to do is to invest in the best software and the best hardware. This will ensure that the computers are more likely to function optimally and not to have any problems, and at the same time it will ensure that they can run the latest software as it comes out giving your staff the most possible creative control and the largest number of tools and features.  Finally, by investing in your computers you future proof your business meaning you don’t have to spend more money again later down the line in order to keep up with the competition. 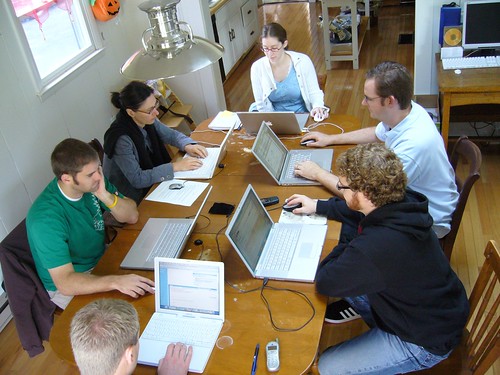 It’s no good just calling in computer support every time your computers start going wrong – far better is to avoid them going wrong in the first place by carrying out routine maintenance and knowing how to treat them well. Invest both the time and the money to get them regularly serviced and to run virus checks regularly.

It’s no good having the latest computers and the best possible set up if it isn’t tailored specifically to the needs of your staff and your business. On a large scale this means making sure that you not only by the right machines for the job, but also that you tailor make your own software that can help to automate and  speed up the daily tasks that they do. On a more intimate basis this means listening to your staff and ensuring they are able to work in the way that best suits them and that they are used to – which may mean having multiple monitors or might mean having a different seat.

About the author: Michael Frampton is a well-known business personality who recommends Oxford function venue perth as a perfect choice for hosting your corporate parties and felicitation functions.